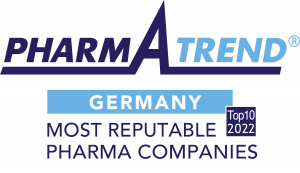 Daiichi Sankyo is ranked 8th in the multidisciplinary “Best Pharmaceutical Companies Germany” 2022 ranking in the category “Large individual, medium-sized and international companies”. Infectopharm, Gedeon Richter, ALK-Abelló and Exeltis placed first this year. Daiichi Sankyo’s most recent new product launch and winner of the “Most Innovative Product” award from the oncologists is the breast cancer drug Enhertu®.

Among several new preparations for the treatment of advanced breast cancer, every third oncology specialist surveyed (33%) in the Pharma Trend Study 2022 chose Enhertu® as the most innovative product in 2022. In the spontaneous nominations without a specification, a further 8% chose Trodelvy® (Gilead Sciences), 7% Keytruda® (MSD) and 5% Tukysa® (Seagen). The decisive criteria for the preparations for the treatment of breast cancer for the oncologists were an innovative mode of action – 70% named this – an improved effect (58%), the novelty on the market (40%) as well as new combination possibilities (30%).

Daiichi Sankyo Co., Ltd. is a Japanese, globally active, research-based pharmaceutical company headquartered in Tokyo (Jap. Daiichi Sankyō Kabushiki kaisha). It resulted from the merger of the Sanky Co., Ltd. founded in 1899 and the Daiichi Pharmaceutical Co., Ltd. founded in 1915 and is one of the 20 largest pharmaceutical companies in the world. Around 16,500 employees generated a turnover of 1044.9 billion JPY (Japanese yen) in 2021, equivalent to approx. 7.52 billion euros.  The annual report states that expenditure on research and development amounted to 260.2 billion JPY, corresponding to approx. 1.87 billion euros, i.e. around 25% of sales – a comparatively high percentage even in the pharmaceutical industry.

Daiichi is present in 26 countries. Both the European headquarters, Daiichi Sankyo Europe GmbH, and the German subsidiary, Daiichi Sankyo Deutschland GmbH, are based in Munich.

Daiichi has made a strong name for itself in cardiology, starting with the first isolation of adrenaline in 1900 – the adrenal medullary hormone that became the first blockbuster drug of the 20th century. Sankyo researchers discovered the first HMG-CoA reductase inhibitor in 1973, the origin of statins to lower cholesterol. In 1989, the first AT-II receptor blocker was launched, the origin of blood pressure-lowering sartans. In 2015 came Edoxaban®, an anticoagulant tablet. The current portfolio also includes drugs for the treatment of atrial fibrillation (e.g. Lixiana®), hypertension (e.g. Olmetec®, Sevicar®), lipid metabolism disorders (e.g. Mevalotin®, Lopresor®, Lomir®, Nilemdo®) and thrombotic diseases (e.g. Efient®). Another well-known drug is Evista® for osteoporosis in postmenopausal women.

In addition to a strong portfolio of cardiovascular disease medicines, Daiichi Sankyo’s Vision 2025 focuses on becoming a “global pharmaceutical innovator with a competitive advantage in oncology”. To this end, the company aims to provide novel therapies in oncology in particular, as well as in other research areas that address rare diseases and immune disorders. An innovative oncology drug was already irinotecan in 1995.

A promising current innovation is trastuzumab-deruxtecan (T-DXd, Enhertu®), an anti-HER2-directed antibody-drug conjugate (ADC) in metastatic breast cancer that delivers a targeted cytotoxic agent to diseased cells. In 2022, it received second-line approval in the EU and the Oncologists’ Most Innovative Product Award.

Daiichi Sankyo has been pursuing specific emission reduction targets for both production sites and research and development centres since 2008. For example, the entire energy requirement of the German plant in Pfaffenhofen for the annual production of 2 billion tablets is generated by a local biomass power plant.

Enhertu®: the most innovative product for oncologists in the field of advanced breast carcinoma

In Pharma Trend, Daiichi Sankyo has long been one of the most sustainable and innovative pharmaceutical companies in Germany. The research-based company receives the award “The Most Innovative Product” from oncologists for Enhertu® 2022 for the treatment of breast cancer. The active substance trastuzumab-deruxtecan (T-DXd ) is an antibody-drug conjugate with a targeted effect on HER2-positive breast cancer cells. Cancer specialists voted for Enhertu® mainly because of its innovative mode of action (76%) combined with improved efficacy (64%) and novelty to the market (52%).

Awards for Daiichi Sankyo for innovation

Daiichi Sankyo first received the 2022 Award for Innovation and Sustainability for Enhertu®.