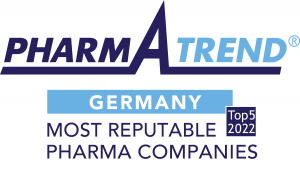 Procter & Gamble comes in 5th place in the multispecialist “Best Pharmaceutical Companies Germany” 2022 ranking in the category “Large individual, medium-sized and international companies”. In 2021, Procter & Gamble was still in 9th place in the ranking. Infectopharm, Gedeon Richter, ALK-Abelló and Exeltis were ranked first this year.

In 1837, two English candlemakers named Procter and Gamble founded a company in Cincinnati (Ohio) that is now one of the 55 largest in the world. The consumer goods giant’s sales reached $76.118 billion in 2021 (up 7% from the previous year). The number of employees at P&G (short for Procter & Gamble) worldwide is around 101,000. In Germany, around 10,000 employees work for Procter & Gamble at 10 locations.

In the consumer goods sector, Procter & Gamble is considered a pioneer in brand management. In Germany, the well-known P&G brands include Braun, Gillette, Pampers and Tempo. P&G’s health division includes Wick (colds), blend-a-med/blend-a-dent, Oral-b (dental care), Metamucil (constipation), the Clearblue pregnancy and ovulation test and the Persona contraception monitor, the distribution of which, however, was discontinued in Germany in January 2022.

The Wick range alone includes around a dozen products for the prevention and treatment of cold symptoms. One of the best-known is the cold ointment Wick VapoRub, which is still called Vicks VapoRub in the original US version. P&G acquired the brand in 1985 through the purchase of the Richardson-Vicks company in Groß-Gerau. It was renamed Wick in German-speaking countries. Wick Pharma is based in Schwalbach am Taunus, the German headquarters of P&G since 1970.

Wick products account for 95% of P&G’s sales in German pharmacies, at around 90 million euros. Wick products are sold in 71 countries. One of the newer ones in Germany is the melatonin-based sleep aid Wick ZzzQuil Gute Nacht, launched in 2021.

In 2021, P&G stands out among the OTC manufacturers with a sales increase of almost 15%. While the overall market grew by only 2% and cold remedies recorded declining sales, the group was able to improve its business to 221 million euros (pharmacy sales prices). The Wick brand even grew by 24%, without the new launch ZzzQuil by 8%. Wick is to be further expanded as a cold brand (Apotheke adhoc, 8.8.2022).

At the end of 2018, P&G had acquired the entire consumer health care business with over-the-counter medicines and dietary supplements from Merck KGaA, Darmstadt, for €3.4 billion. The most prominent brands include Nasivin, Femibion, Dolo-Neurobion, Vivera/Floratil, Sangobion, Vigantol/Vigantolvit, Apaisyl, Kytta, Neurobion, Bion3 and Seven Seas. This range provides P&G with additional revenues of 136 million euros in Germany, which puts P&G in 8th place among OTC manufacturers (Apotheke Adhoc 28.01.2019).

P&G has committed itself to being carbon neutral by 2030. P&G is committed to equality and inclusion in the company and in its advertising.