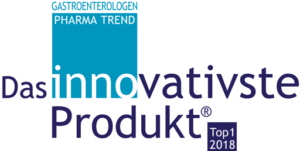 Eosinophilic esophagitis (EoE) is a chronic, immune-mediated inflammatory condition of the esophagus, which can be effectively treated with topical steroids. Yet until recently, no mode of administration had been approved and optimised specifically for EoE. This gap has now been closed by the new budesonide orodispersible tablet (with effervescent quality) Jorveza®, which gastroenterologists considered the most innovative product of 2018 and which was honoured accordingly at the 19th Pharma Trend Image & Innovation Award. The second place in this discipline was awarded to the hepatitis C drug Maviret from AbbVie (13%), followed by Stelara (11%) in third place, which is indicated in Crohn’s disease.

Gastroenterologists surveyed in the “Pharma Trend 2018 study” considered Jorveza® for the treatment of eosinophilic esophagitis to be the “Most Innovative Product”. The physicians praised the improved handling and mode of administration (58%), the product’s innovation in the market (53%), its new and innovative mode of action (53%), the extended spectrum of efficacy and improved effectiveness (26%), as well as Jorveza’s® simplified dosage.

At times, progress in pharmacotherapy does not require a new agent but an improved and innovative mode of application. This is the case with eosinophilic esophagitis (EoE), a rare but serious chronical inflammation of the esophagus which is accompanied with difficulty swallowing and/or pain during swallowing. EoE was first described only in 1993 and, with about 16 patients per 100,000 people, it is classified as an orphan disease. Even though EoE is not widely known among the public, gastroenterologists have to deal with it increasingly frequently. It is estimated that about 15,000 people are affected in Germany alone, with males aged 30 to 50 being most at risk. The causes of this specific eosinophilic inflammation of the esophagus are not entirely clear; but food and environmental allergens are very likely of pathogenetic importance. The inflammation takes a progressive course and must be treated, not just because of the patients’ severe suffering but because of the risk of a so-called bolus obstruction. Dr. Martin Strünkelnberg, Head of Marketing with Dr. Falk Pharma GmbH, explains: “Some patients find themselves in the ER because they choked on their food. Any such obstruction must then be removed endoscopically or pushed down into the stomach, at the risk of an perforation of the esophagus.”

Besides avoiding potential allergens, therapies for EoE are based on topical steroids such as fluticasone and budesonide. These have so far been prescribed off-label as a thick syrup, or asthma sprays which were applied to the throat and swallowed, or a powder which was applied to the tongue – at times with limited success. With the new budesonide orodispersible tablet Jorveza®, an approved and very effective treatment for EoE is now available for the first time.

In this case, our expertise as a medium-sized company consisted in devising a special formulation for a known agent”, explains Dr. Strünkelnberg. “Jorveza® combines two pharmaceutical principles: an effervescent and orodispersible tablet. Placed on the tip of the tongue and gently pressed against the roof of the mouth, the agent is released slowly and steadily over a period of several minutes. The effervescent features induce salivation, and the saliva in turn transports the agent to the esophagus. Due to the adhesive property of the saliva, the agent is delivered to the mucosa of the esophagus where it is able to achieve very high rates of efficacy.”

This principle was confirmed in the pivotal study. After six weeks of treatment, 59% of the participants achieved a clinical remission, compared to only 14% of those who received placebo. For 61% of the treated patients, but for none among the placebo group, the esophagus had healed (endoscopic remission). When patients without clinico-histological remission were administered Jorveza® for another 6 weeks, the rate of patients with clinico-histological remission increased to almost 85%. Jorveza® by Dr. Falk Pharma is available on the German market since June 15, 2018.
Further information on Jorveza®, prescribing information and prices are available here.

First-time award for innovation and sustainability for Dr. Falk Pharma

The awards, which have been granted since 2000, honour the innovativeness and sustainability of pharmaceutical companies and the progress and benefits afforded by new drugs, as assessed by independent physicians in Germany. Dr. Falk Pharma received the “Most Innovative Product” award for Jorveza® for the first time in 2018.
Awards received by Dr. Falk Pharma since 2000:

The “Most Innovative Product” award honours the innovativeness and the treatment benefits of a drug. The added benefits will often result from the application to individual groups of patients. A remarkable result of the survey among gastroenterologists was that the physicians consistently praised the new and innovative mode of action (46%), the product’s innovation in the market (45%), its extended spectrum of efficacy and improved effectiveness (42%), the  improved handling and form of application (26%), and Jorveza’s® simplified dosage (26%).

About the awards ceremony

The discipline-specific awards were granted on September 18, 2018, at the German Museum in Munich as part of the 19th Pharma Trend Image and Innovation Award. The Eurecon publishing house, initiator of the Pharma Trend market research and host of the Pharma Trend Image & Innovation Award, honoured the best pharmaceutical companies with the award “The Golden Tablet” and distinguished the most innovative drugs with the “Most Innovative Product” award. Both of these awards are based on the Pharma Trend study, a representative survey that has been conducted annually since 2000 among independent physicians and, since 2018, also among pharmacists in Germany.

Pharma Trend has been evaluating new drugs for their benefits in therapy since 2000, asking the opinions of the users, i.e. the physicians. Thus, the benefits are assessed from the perspective of those who apply these drugs on a daily basis. In 2018, the Pharma Trend survey was conducted online in the Rx category among about 800 physicians from seven expert areas: dermatologists, diabetologists, gastroenterologists, gynaecologists, neurologists, paediatricians and oncologists/haematologists. The most innovative drugs were honoured with the “Most Innovative Product” award, and the best pharmaceutical companies in each specialist discipline received the award “The Golden Tablet”. Additionally, the 2018 edition of the survey for the first time included pharmacists and patients in the area of self-medication. Furthermore, an interdisciplinary jury of six experts assessed the submissions of start-ups from the biotechnology, medical technology and digital health sectors with respect to their innovativeness and benefits for the patients.

For further information on the award recipients in 2018 and on the awards ceremony, please visit our YouTube channel.